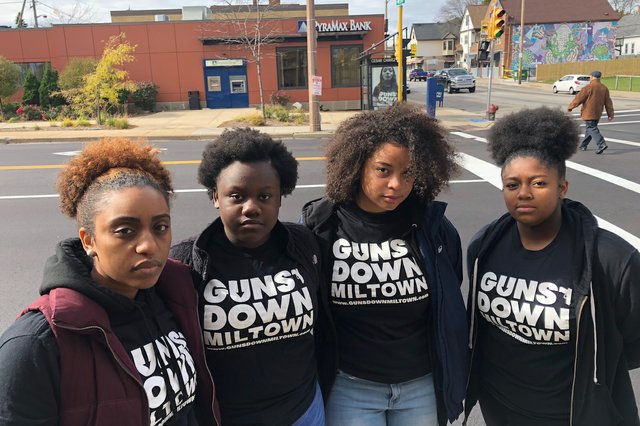 Shana Kidd (left), the youth violence prevention coordinator for the City of Milwaukee, joins other youth across the city who are involved in the campaign.

Milwaukee citizen Melody Villanueva lost her son to gun violence just two months ago. He was unarmed and killed in his own home. In an attempt to turn this tragedy into a positive she decided to work with Guns Down Miltown, an awareness campaign whose goal is to stop gun violence across the community.

“I’m so happy and glad to be a part of this cause, not only because it means so much to me, but because gun violence doesn't always only kill just one person,” she said. “I feel that I was effected in a lot of ways as well. A part of me is dead.”

Guns Down Miltown began their work in the community more than 16 years ago, hosting concerts where youth could sign a summer of peace pledge. Just recently however, they started to use social media and a billboard campaign to spread their message of nonviolence. Their message is simple; gun equals death.

“This movement isn’t going to get wrapped up in politics or policies… we’re trying to change the message in the community,” said Gideon Verdin, one of the creators of the movement. “We are trying to combat the negative images that the young kids see over and over again, with something positive.”

They are attempting to grow awareness to an issue they say is going in the wrong direction by using social media and the hashtag #gunsdownmiltown. Of the 89 homicides in Milwaukee this year, 83% were caused by a shooting. This is consistent with data from the last three years, according to a homicide tracker organized by the Milwaukee Journal Sentinel. 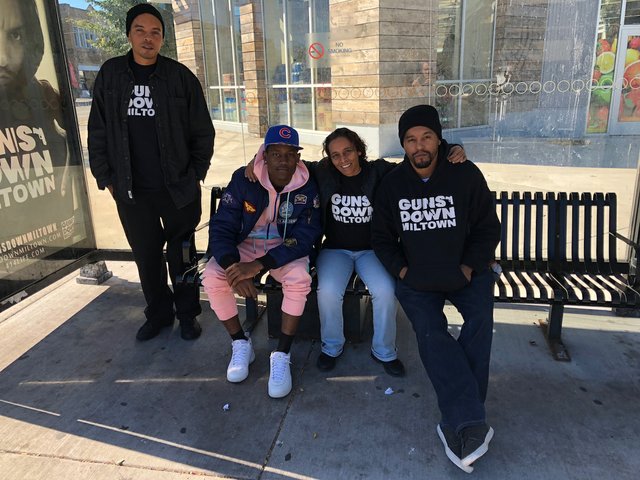 Gideon Verdin (right) and Melody Villanueva (2nd from right) are organizers with Guns Down Miltown, an awareness campaign attempting to educate others about the negatives of gun violence.

“Actions done by people thinking that a gun is just a toy and forgetting what the foundation of a gun really means, is just nonsensical,” said Villanueva. “We need to remind our communities that we’re all impacted by gun violence, one way or the other, indirectly or directly.”

Guns Down Miltown currently has posters placed on the sides of eight bus stop shelters around Milwaukee, with plans to put more up soon. They are doing this with help from the City of Milwaukee, specifically the Office of Violence Prevention, which provided funding for the posters and released the Blueprint for Peace last year. They are hoping to place their message on digital billboards over the interstate soon as well.

The organization also hopes to develop a youth scholarship program where teens can help with the mission of the organization. They are working with local urban gardens across the city as Verdin recently worked with a group of youth to install new flower beds at the Peace Park and Garden on Locust St. Guns Down Miltown are also selling t-shirts online. Verdin said any proceeds made from selling t-shirts or merchandise will go towards the production of more shirts and communication towards their goal.

Reggie Moore, director of the Office of Violence Prevention, said the campaign is growing awareness about this issue. “As much as we amplify the homicides…we have to celebrate the wins,” he said, mentioning a recent period where a homicide was not recorded in the city for nearly four weeks. “We can go an entire year without a homicide if we really commit to it.”

You can learn more about Guns Down Miltown here: https://gunsdownmiltown.com/.

Back to Community Events